Discover what other employers are doing!

HR Quick Surveys are a great way to discover what other employers are doing about specific issues, big and small. When a member requests a survey, we invite the participation of those who have signed up to do so, compile the results, and post them here. It's quick and easy and all online. This is a no-cost benefit exclusively for WCI members, and requires login to our Member Area.

One of our members submitted a request through this website to learn what other employers are doing to incentivize productivity when cash flow is a problem. We broadened the scope to see all the incentives, while also asking for low cost ideas. 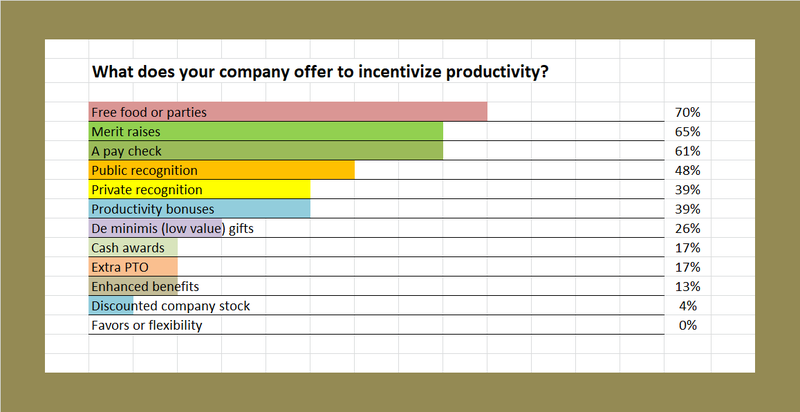 It should be noted that no survey respondents indicated that "a pay check" was the only incentive they offer. Perhaps it could be said that 61% of these employers believe that a pay check is, in fact, or should be an incentive. Almost all companies offer multiple incentives to encourage productivity.

Here are some specific examples from our quick survey. If a department's quarterly goal is reached, lunch or a merit bonus is provided. The percentage that an annual goal is achieved is the percentage of the maximum bonus awarded. Every hourly worker earns a 10% monthly bonus if all production standards are met. One company uses YouEarnedIt for recognition points that can earn gift cards. Another employer discovered that the act of asking employees how they would like to be appreciated and rewarded became a reward of its own. Another good tip was to base the reward on something significant, measurable, and perceived as fair and equitable by employees.

Some other incentives added to our list were logo merchandise, a recognition email program, and periodic drawings for Kaizen improvements. There was also mention of the fact that the manager personally thanking their employee goes a long way.

When providing low cost incentives on a budget, the most mentioned idea was public recognition of individuals and teams, and acknowledging the productivity with a simple thank you. Other popular ideas were doing something fun together that doesn't cost much, and finding a way to provide meaningful and proactive appreciation that is tailored to the achievement. Other ideas include reward pot lucks, company logo items, small gift cards, inexpensive food and celebrations, movie tickets, and being taken to lunch by a manager or executive. Non-monetary incentives include a special parking spot, a certificate to display, a better job title, and being included in a management decision.